I managed to get myself involved in a play this Spring. I had notions of trying to direct a play myself (Shakespeare’s Twelth Night was the leading contender), only to discover that someone else was ramping up to do this one, and would probably be pulling from the same pool of actors that I would have tried to cast. So I tossed my idea out and threw in with them. 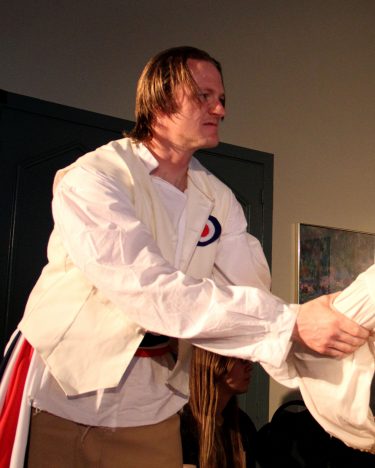 I suppose you could say the whole endeavor went relatively well. I was cast in a minor role as one of the villain’s henchmen, which required me to do just a little singing in choruses and to pronounce my two or three lines of dialogue with a French accent. I think I got to speak the best verbal gag in the show (for those of you who know it, it was “Well…it spoke Latin”). For me it was generally fun, but not too taxing or overwhelming.

I actually wanted to be more involved than just that, so I volunteered to act as assistant to the director. I find that my efforts there weren’t really of all that much use. I tried to take copious notes of all the stage directions that she invented as she invented them. I say I tried because sometimes I was busy writing down the stage directions for my own character, or worse yet, I was busy actually trying to execute my stage directions, so I seemed to miss a lot. The few times someone actually asked me what my notes were, they tended either to be missing, or to contradict whatever the actor remembered such that I was summarily overruled. Despite the notes never getting much use, I found I got a bit misty the day I was asked to erase them all out of my folio. It must have taken me a full hour to get through it all, as I had very generously decorated every page of the thing.

A slightly more useful (albeit not much more) task I took on was the building of a website to promote the show. You used to be able to find it at magnificentproductions.net, but alas, it is no more.

The thing I did for the show that really was useful was craft services. I brought snacks to every rehearsal. I don’t suppose they were the greatest snacks of all time…I would usually just raid a Ralph’s before each of our big Saturday rehearsals, with a trip or two to Smart and Final to buy bulk items that would keep longer. You get a really good sense of what people want to eat vs. what they say they want to eat. Everyone always asks for healthy stuff: fruit, vegetables, bagels. But the donuts will always get devoured before the carrot sticks. I suppose then, that while I may have contributed a great deal to the ability of our cast to continue to function throughout some of our longer rehearsals, I may have also contributed to their girth. Sorry kids. 🙂

I thought that when the show ended, I would be quite beside myself. I knew that once it was over, I wasn’t really going to have much opportunity to interact socially with all these wonderful people anymore. I’m not all that fun to be around, I think, so generally no one seeks me out just to have me around. In any case, I think it was a good thing that the night we did our final performance, we immediately adjourned to someone’s apartment for a little party. If I had been forced to go home immediately, the rather abrupt end would have probably induced me to cry myself to sleep. We were in rehearsal from the beginning of February through mid-April (or at least I was…I apparently joined the cast a bit later than everyone else), and by the end, it was taking up nearly every moment of my free time. So it was a good thing to have an immediate cast party to start the closure. We had another party a little later, smoothing over our break-up with the play a little more. Perhaps the others were simply relieved it was all over. I wish it was going still.